Get Out The Vote!

THE RESULTS ARE IN:

Congratulations to the winning candidates.

Check out our handy

in the sidebar on the right to find where your Polling Place is, and track the results after the election.

Before you VOTE – Find your Polling Place

Look Up Your POLLING PLACE here

After you VOTE – Track the Election Results 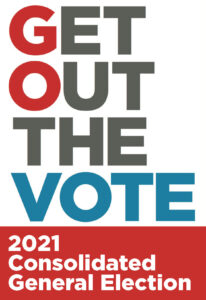 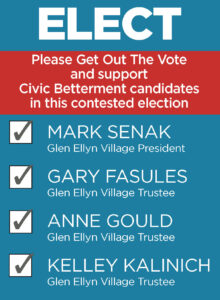 For the past 90 years, Glen Ellyn’s Civic Betterment Party has sought out and encouraged our town’s residents to serve in the vital roles of Village President, Village Trustee, Village Clerk, and Library Trustee. Organized in 1931 in response to financial burdens placed on village residents, Civic Betterment continues to be a unique volunteer organization without major political party affiliation or platform. Civic Betterment represents you, the citizens and taxpayers of Glen Ellyn, by enabling and inspiring your neighbors to fulfill the all-important duties that come with serving on our village and library boards. After nine decades, the Civic Betterment process and tradition remains as singular and distinctive as the village it serves.

Civic Betterment counts on the generous citizens of Glen Ellyn to preserve this unique process which allows our town’s residents to run for village-wide offices without the burden of raising campaign funds. We’ve all been subjected to the current political climate of partisan conflicts and astronomical spending. As such, we can all appreciate the model of our own local government and the process that makes it possible. Annually, we appeal to the citizens of the village to help Civic Betterment raise funds to cover the costs necessary to operate. While we strive to carry on this tradition on a tight budget, Civic Betterment does incur expenses including the nominating process, informational mailings and signage, website hosting, and the biennial Town Hall Meeting.

Your contribution of $25, $50, or any level of support, will help assure that Glen Ellyn continues to enjoy first-rate local government going forward and make certain that Civic Betterment can continue with its mission of “Neighbors Nominating Neighbors.” Current CBP by-laws limit contributions to $300 per citizen annually.

OR YOU CAN DONATE ONLINE:

Thank you very much for your consideration.

To learn more about Glen Ellyn’s Civic Betterment Party and the upcoming Consolidated General Election on Tuesday, April 6, please check out the links in the right side bar where you can read about Civic Betterment, our history in Glen Ellyn, and our candidates.

Please lend your support and vote for your fellow neighbors running for the following offices on April 6!

Thank You and Best Regards,

Vote on Tuesday, April 6 for the election of Glen Ellyn Village President, Village Trustees, Village Clerk, Park District Commissioners, Library Board Trustees, and School Board Members. Many have asked what the purpose of the election in November was. In essence, it was a much like a caucus held in order to get candidates on the ballot for the Consolidated General Election this spring. Our job to help educate the voting public on the process and to support Civic Betterment candidates continues. Should you have any questions, please click on the “Contact Us” link above and a CBP representative will respond to you.

To read about Civic Betterment candidates for village and library offices, click the links to the right. You’ll find a brief bio and statement for each candidate, as well as a link to contact each in order to ask questions.

Please show up to vote and lend your support to your fellow neighbors running for the following offices:

The candidate with the highest vote total for Glen Ellyn Village President was Mark Senak.

The three candidates with the highest vote totals for Glen Ellyn Trustee were:

The candidate with the highest vote total for Glen Ellyn Village Clerk is Caren Cosby.

The three candidates with the highest vote totals for Glen Ellyn Library Trustee were:

Civic Betterment thanks all candidates and citizens for participating in this event.  This was a challenging cycle given the current COVID-19 pandemic and we wish to thank the over 1700 citizens of Glen Ellyn that participated.  We strongly encourage Village of Glen Ellyn citizens to participate in the Spring Election which will determine your Village President, Village Trustees and Clerk and Library Trustees.

The ongoing Coronavirus pandemic is a concern to the Civic Betterment Party of Glen Ellyn. The health and safety of all Glen Ellyn voters will be our top priority moving forward. Due to the issues surrounding and the uncertainty caused by the COVID-19, the Civic Betterment Party has made several changes to its nominating process for village board and library trustee positions for this election cycle.

The 2020 Election Process and final voting will be held on Saturday November 14. We suggest you utilize the website to “get to know” the candidates. Candidates have provided email addresses in order that your questions can be submitted privately to each candidate. All early voting, drive-thru voting and in person/Civic Center voting times are also posted on the website.

The officers and Nominating Committee members of Civic Betterment appreciate the interest and participation of the citizens of Glen Ellyn and look forward to a successful process despite these unusual times.

Multiple locations will be available for residents to vote on Saturday, November 14th.  Socially distanced voting at the Civic Center will be an option as well as Drive-Thru Voting (Stay in your Car).

In Person at Civic Center

(Stay in your Car)

Voters must be residents of incorporated Glen Ellyn and be at least 18 years of age. It is not necessary to be a registered voter. Voters are reminded to bring proof of residency in the form of a valid driver’s license or state issued ID card with current address.

Thank you for supporting your neighbors running for office . . . and for having a say in how YOUR village is governed!

AMENDMENT NO. 1 . 2020 Accommodations for “Write-In” Candidate Nominations “from the floor”.

ONLY for the 2020 CBP election and voting cycle, “write-in candidates”, rather than coming forth through a nomination from the floor at the Town Meeting, will be so acknowledged as a “write-in-candidate” and their respective name will be listed on a sheet of paper accompanying the election ballot PROVIDED such a “write-in candidate’s” nomination: (a) is for a person (write-in candidate) who is a legal resident of the Village of Glen Ellyn and has legal eligibility to hold the subject office for which such resident is being nominated; (b) is done on or before October 31, 2020 at 10:00 p.m.; and (c) is so made, tendered and given in writing (paper or email) to either the President or Nominating Committee Chair of the Civic Betterment Party (CBP) by such date and time. Either the CBP President or Nominating Committee Chair will make this process known to all who interviewed for CBP Nomination Committee endorsements and were not endorsed by the party by October 28, 2020. This process will also be posted on the CBP website.

a. If a person is nominated from the floor, her/his name will be listed on a sheet of paper that will be distributed along with a ballot to every voter during early voting and voting at the Town Meeting. Blank lines, with as many lines as there are openings for the position, will be included on the ballot. A person wanting to vote for a write-in candidate would simply “write-in” the nominated “write-in candidate’s” name from the aforementioned furnished list onto one of the blank lines, so reserved for write-in votes in the correct section of the ballot (or write in another name not listed.)

b. A write-in candidate is welcome to send in a photo, candidate statement, and video for inclusion on the CBP website. CBP reserves the right to edit and limit (including abbreviate) the content of any candidate statement and/or video in the same or similar manner and practice as it may do or may have done as to any other slated candidate of the CBP Nominating Committee. Such information must be received by November 7, 2020 in the same format as CBP endorsed candidates, including plain backgrounds, space and time limits, and suggested outline/speaking points. Any information submitted and not following the format will be excluded. The write in candidate’s information will be posted on the CBP website before the Town Meeting and on or after Thursday, November 12, 2020 at 7 p.m. CT. The information will be preceded by the words “write in candidate” and will be placed after that of the CBP Nomination Committee endorsed candidates.

The Glen Ellyn Civic Betterment Party is proud to announce the following candidates for village offices. Final CBP candidates for the Spring 2021 consolidated general election held on April 6 will be determined at the Town Meeting on Saturday, November 14. Expanded early voting times and location to be announced soon: